Did Anadolu Agency think the news of a French humor magazine real?

The news of Anadolu Agency (AA) on 24 June 2020 reported that there was a statement about his manner in Libya that Recep Tayyip Erdoğan is the only person who plays fair in an article of the French magazine, Le Canard Enchainé. The news platform such as Hürriyet, Milliyet, En Son Haber, Yeni Şafak, İhlas Haber Ajansı (İHA), Haberler.com, İnternet Haber, Finans Gündem and Takvim also shared the news of the AA.

However, other news websites such as T24, Medya Faresi, and Gerçek Gündem stated that the French magazine, Le Canard Enchainé is in fact the “satire” magazine and the news is not real. 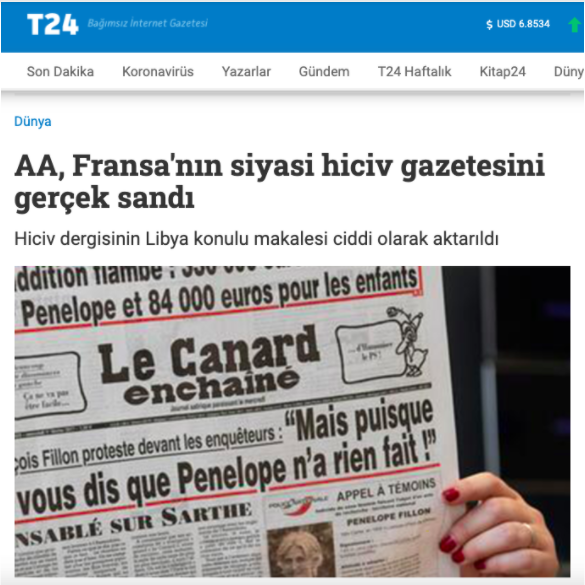 The French magazine, Le Canard Enchainé defines itself as a magazine that makes “satire” news.

However, the “satire” category is not the same as the “parody” category with satire-intended fabricated content. Zaytung is one example of it in Turkey. Le Canard Enchainé has been published in France for more than 100 years and is considered a respected magazine with many investigative journalism successes. Although the general style of the newspaper is sarcastic, there are also political cartoons on its first page and among the news.

When we look at both the issue of the journal dated June 24, 2020, and the old issues of the magazine, we see that the essays and opinion articles related to non-fake and popular news are dominant.

The columnist in the claim is Claude Angeli, who has been a journalist for many years and was also the editor-in-chief of Le Canard Enchainé for a period. 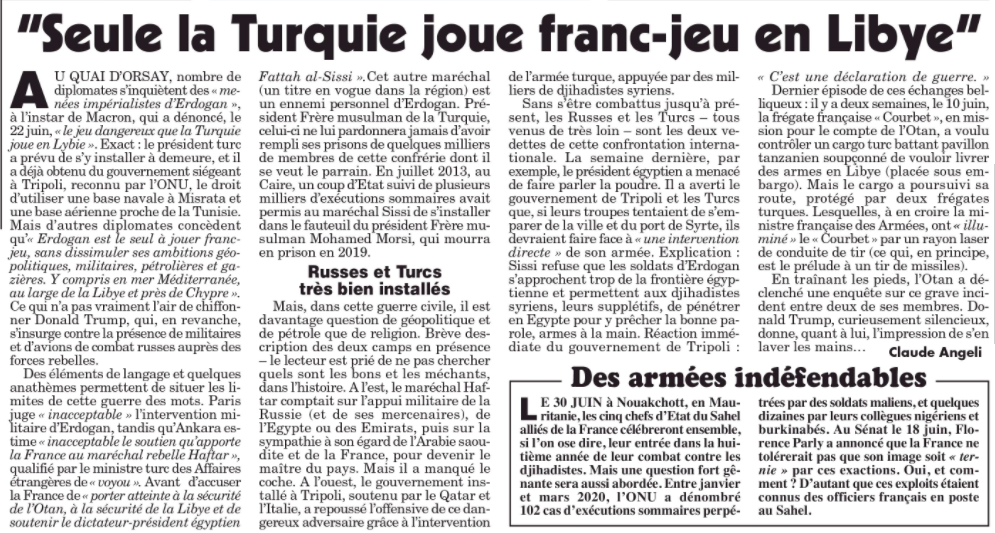 The English translation of the news is as follows:

“Only Turkey plays fair in Libya”

Many diplomats in the French Foreign Ministry expressed that they are concerned about “Erdogan’s imperialist tendencies” just like Macron. On June 22, Macron warned, “Turkey is playing a dangerous game in Libya.”

That’s right: President of Turkey plans to settle permanently there, and he obtained the right to use an airbase close to Tunisia and a naval base in Misrata from the government based in Tripoli recognized by the United Nations.

However, according to other diplomats, “Erdogan is the only player who plays the game openly, without hiding his geopolitical, military, oil and gas claims. This includes the Mediterranean off Libya and near Cyprus.”

Apparently, this does not bother Donald Trump, who opposes the presence of Russian soldiers in the region and Russian warplanes standing next to the rebel forces.

Analyzing certain discourses and condemnations makes it possible to determine the limits of this word duel.

Paris assesses Erdogan’s military intervention as “unacceptable,” while Ankara finds the support of France to the rebel marshal Hafter, who is said to be “bandit” by Turkey’s Ministry of Foreign Affairs as “unacceptable.”

It then accuses France of endangering the security of NATO and Libya in the region and supporting Fattah al Sisi Egypt’s dictator president. This other marshal, (a fashionable title in the region) is Erdogan’s enemy…

He, as president of the Muslim Brotherhood in Turkey, will never forgive that the thousands of militants of the sect under his cover has been locked up in jail by Sisi.

In July 2013, thanks to the military coup in Cairo and the execution of thousands of people without trial, General Sisi overthrew the head of the Muslim Brotherhood, President Mohammed Mursi. Mursi later died in prison in 2019.

Russians and Turks are well settled

However, this civil war is more about geopolitics and oil than religion.

To introduce both sides briefly: readers should not question who is good and who is bad in this story, please.

In the east, Marshal Haftar relied on the military support of Russia (and his mercenaries), Egypt or the United Arab Emirates, as well as the moral support of Saudi Arabia and France, to become the master of the country. But he missed the opportunity.

The government in Tripoli, supported by Qatar and Italy in the west, repelled the attack of these dangerous adversaries through the intervention of the Turkish army, supported by thousands of Syrian jihadists.

Although they have not fought each other until now, both Russians and Turks have been the two stars of the international conflict.

For example, last week, the Egyptian leader destroyed the threat of military intervention. He warned the Tripoli government and warned the Turks, declaring that if they attempted to capture the port and city of Sirte with his military forces, he would be subjected to the “direct intervention” of his army.

Explanation: Sisi refuses Erdogan’s soldiers to get too close to the Egyptian border and to support the Syrian jihadists to enter the country for the “propaganda” with weapons. The Tripoli government’s immediate response was: “This is a declaration of war.”

The last act of this duel: Two weeks ago, on 10 June, while the French warship named Courbet was on NATO mission, it wanted to control a Turkish cargo ship with a Tanzanian flag suspected of carrying weapons to Libya. (Weapon embargo is imposed on Libya)

However, the ship continued with two Turkish frigates. According to the French Defense Minister, these two warships locked their missiles on Courbet (which is usually the last stage before launching missiles).

NATO has reluctantly launched an investigation into this serious tension between its two members. Donald Trump, on the other hand, gives the impression surprisingly by being silent that he did not care about what happened.

Teyit reached the French journalists to consult about the magazine and news text. Alexandre Capron of the France24 team stated that the magazine included political satire like Charlie Hebdo. The French journalist Liselotte Mas, who makes news about Turkey and is knowledgeable about Turkish politics, stated that the news in the magazine is based on the correct information, but the language and jargon are just sarcastic. Mas stated that the political cartoons in the newspaper cannot be described as “fiction” or “far from the truth”, and that they have never produced parody news such as Zaytung. Mas, who is also a fact-checker in France24, underlined that she has not found any fake content in the magazine so far. According to Mas, the reason for the newspaper calling itself “satire” is its style.

Political scientist, Sinan Baykent, had written an article for Independent Turkey on developments in Libya. Baykent told Teyit that Claude Angeli’s article was not based on “fake” information and that the magazine had produced many examples of investigative journalism for years. Fatih Karakaya, a Turkish journalist who lives in France, also stated that the French magazine did not make any parody news.

On Wikipedia, there is a list of some important events in terms of French domestic politics that Le Canard Enchainé magazine has revealed so far. For example, in La Figaro newspaper, the names of some politicians whose political lives were destroyed due to Le Canard Enchainé magazine. An example is the fact that Alain Juppé, one of the ex-Prime Ministers of France, had already been in the public property for five years when he took office in 1995. The statement of French journalist Alex Caprone to Teyit is very remarkable: “If you want to end the life of a politician in France, you can do this by reaching Le Canard Enchainé.” It may not be correct to say that such a journal should not be taken seriously.

One of the journalists whom Teyit talked stated that the author of the article, Angeli, had strong connections, and therefore the “diplomatic” sources in the article were probably hidden real sources.

Readers of the news agree on the main message of the content as follows: “At least what Erdogan wants to do in Libya is clear, he says he will occupy it and he does. Macron is inconsistent.” In other words, the purpose of the content is to ironize the French politician because of the inconsistencies of the same issue, rather than praise Erdogan’s Libyan policies. For this reason, the news of the Akşam Newspaper can be considered more reasonable.

In the headline of the news, “Seule la Turquie joue franc-jeu en Libye,” the phrase “franc-jeu” should be considered “clear” rather than “fair” according to Alexandre Capron. Capron also stated that the general interpretation of the article can be that Turkey’s military intervention is unacceptable.

The satirical magazine, which appears to criticize the government on the political scale in France, has previously included some news about President Erdoğan. For example, the headline of a 2016 issue was “Putin and Erdogan finally decided to be more than friends, tyrants…” On December 26, 2018, a cartoon about Erdogan was published in the magazine:

“Erdogan: ISIS, Kurds … and why shouldn’t we find a few Armenians!”

Private Eye in Britain and Charlie Hebdo in France share similar tendencies. They both use cynical language and publish political cartoons. However, the content of the humor magazine does not consist only of cartoons like the examples in Uykusuz, Leman, and Penguen in Turkey. News magazines with satirical language have an important place in the history of French culture. The history of the satirical news goes back to the years of revolution in the country. 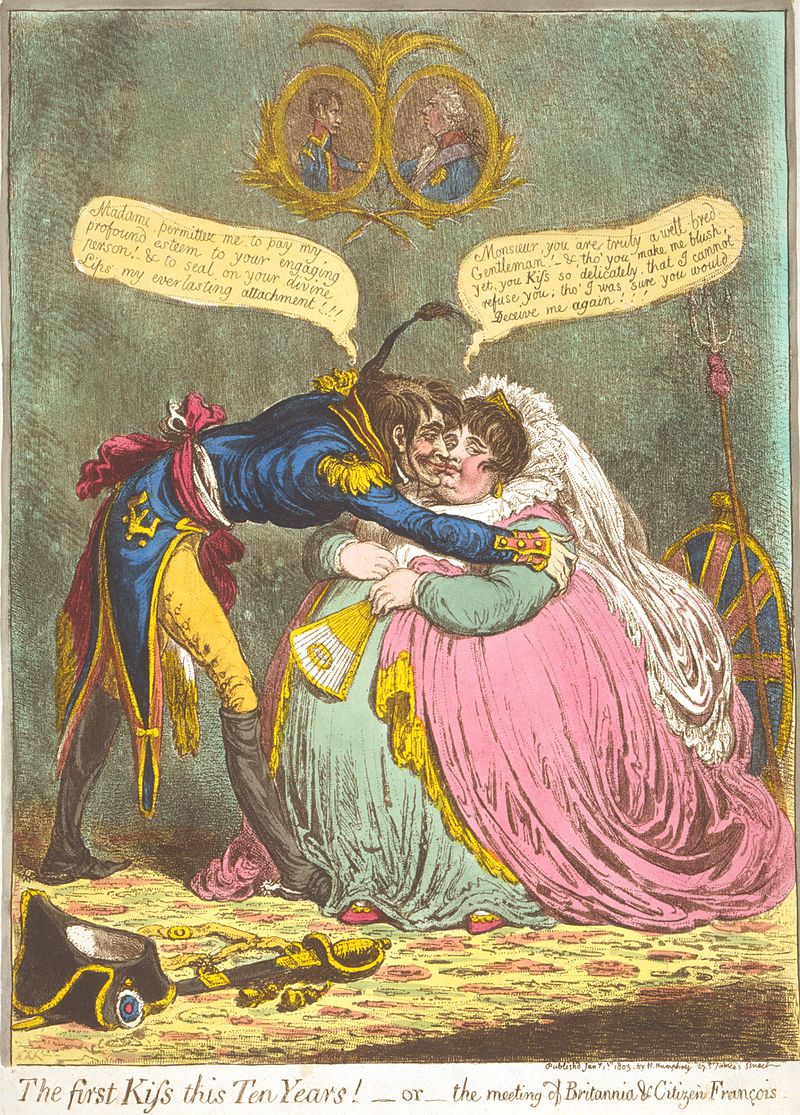 French President Emmanuel Macron accused Turkey of playing a dangerous game, saying, “We will not allow Turkey’s role played in Libya.” Following the words of Macron, Hami Aksoy, the spokesperson of the Ministry of Foreign Affairs, said, “Macron’s definition of the support of our country to the legitimate government of Libya within the framework of the relevant United Nations resolutions and in line with its request as a “dangerous game” can be only considered to be the eclipse of reason.

In conclusion, although Le Canard Enchainé magazine describes itself as “satirical”, this does not mean that the content should not be taken seriously. The magazine is not known as a publication that makes parody news. Claude Angeli’s article with the headline, “Only Turkey plays fair in Libya” has a satirical language, but not based on false facts.

Le Canard Enchaine, The first page of an issue in 2016

BBC Turkish, The reaction of Turkey to Macron about Libya', 23 June 2020

French a La Carte, French humour, is it difficult to understand?, 12 July 2017

Wikipedia,  The list of the political events revealed by Le Canard Enchainé

Independent Türkiye, On the demons of modern French politics and Libyan politics of Macron, 24 June 2020

Le Canard Enchaine, The first page of an issue in 2016

BBC Turkish, The reaction of Turkey to Macron about Libya', 23 June 2020

French a La Carte, French humour, is it difficult to understand?, 12 July 2017

Wikipedia,  The list of the political events revealed by Le Canard Enchainé

Independent Türkiye, On the demons of modern French politics and Libyan politics of Macron, 24 June 2020