Does the photo show the F-16s drawing heart in the sky in Idlib?

After 36 soldiers killed in the attack in Idlib, there have been many posts on social media. The photo was shared on 1 March 2020 by Abdullah Ağar, who is a security expert. He claimed that the photo was taken by the commandos in the Serakib-Neyrab base in Idlib. 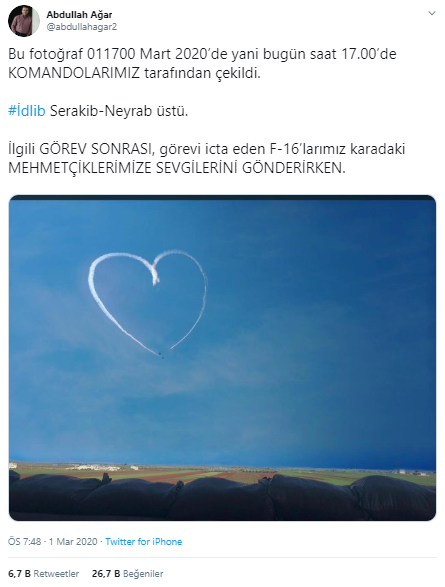 The photo was reported by some news websites and Habertürk television. Also, the newspaper Akşam published the post on its first page. The post of Ağar only got 24,000 likes and almost 7,000 retweets.

The original photo, which can be found on Getty Images, has an explanation as “Aerobatics for the romantic air display. Two airplanes leaving a contrail heart in an almost clear sky.” The photo was taken by Geraldine Rowe. When the photo is closely examined, the planes appear not to be F-16s. Also, the original photo does not have the land part, which has been added to the photo in question.

The planes in the photo and the similarity of an acrobatic plane.

Getty Images is a website on which photos can be bought. Therefore, the photo with the heart in the sky was bought and used in the cover of a book in Spanish, called “Where would I be without you?” 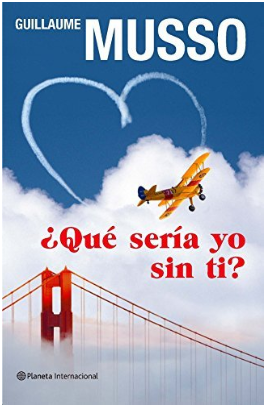 On 2 March 2020, Abdullah Ağar made a statement about it on his social media account and apologized for the photo with photoshop.

In conclusion, the claim that the Turkish F-16s drew the heart shape in the sky in Idlib is not true. The post in question is an example of manipulation.

Amazon, Where Would I be Without You?, Guillaume Musso

Amazon, Where Would I be Without You?, Guillaume Musso