Does the video show pills in a coconut cream bar snack produced by Şölen Çikolata?

It was claimed in a YouTube video that two pills were found in a Luppo cake, a coconut cream bar produced by Şölen Çikolata. As the video quickly went viral on social media, receiving tens of thousands of shares on Facebook and even becoming a topic of conversation in Iraq and Israel, the fact that the product in question was a snack typically consumed by children increased concerns further.

However, the claim is false. A closer look at the video reveals the deformation on the cake. The product in question, Luppo Choco Coconut Cream Cake is not sold in Turkey. It is an export product for which both internal and independent laboratory results were clean.

It is possible to find an earlier copy of the video, which has a better resolution and sound quality, by running a reverse image search. At 00:45 in this video a voice, speaking in Sorani, a Kurdish dialect which is the official language of the Iraqi Kurdistan Regional Government (KRG), is heard in the background saying the cakes came from Turkey. This suggests that the video was probably filmed in Iraq.

Another Turkish export product seen in the video is an Aspiliç chicken by As Tavukçuluk. The company’s biggest export market is Iraq, which further supports the possibility that the footage is from Iraq. 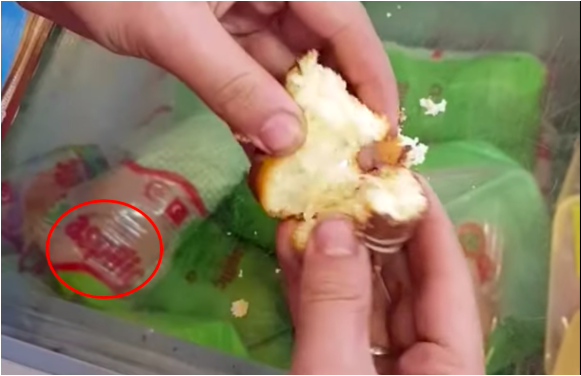 In addition to domestic tests, export products are also checked at the customs of their respective countries of destination. Hence, if something was planted in these products, it was quite probably added after delivery in Iraq. KRG’s Ministry of Health also confirmed in a statement that the pills were added later.

Moreover, when we slow down video speed to 0.25x, we see the hand in the video suspiciously opening a third pack instead of the first two packs which were shown in close detail. When we further analyze the footage, we also see the punctures on the cake. The pills shown later in the video are somehow found right under these holes. 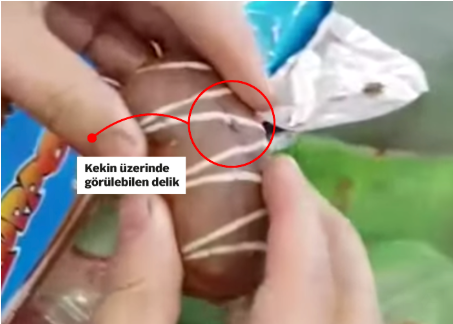 Puncture seen on the cake

On a different note, journalists in the region told Teyit that a boycott movement against Turkish products have been launched in Northern Iraq after Operation Peace Spring, hinting at a possible link with such defamatory videos.

Teyit also spoke to the former head of the Chamber of Food Engineers, Petek Ataman, who not only questioned how easily the pills were found in the video, but also pointed out that had there been a foreign substance in the cake, it would have melted or otherwise become deformed. When asked about the possibility of a deliberate effort by the manufacturer, Ataman commented that although today food security and bioterrorism are significant threats, this case is not an example of that.

Indeed, according to the World Health Organization’s report on “Terrorist Threats to Food”, the basic active agents used in food sabotage include toxic chemicals, microbiological pathogens, heavy metals, pesticides and radionuclear substances, which are all extremely dangerous materials that require wearing safety gloves to be handled.

Speaking to Teyit, a narcotics officer rejected the possibility of the pills having been inserted during manufacturing as this would have impacted their chemical effect, adding that it is also very easy to counterfeit the cake and its package.

Food sabotage claims are not a new thing. A similar claim in the USA, that pills and needles were found in Halloween candies, sparked major concern in 2015. However, investigation showed that it was just a “childish prank”.

In conclusion, the claim that pills were found in Luppo cakes is not true. The snack bars in the video are export products, which are duly inspected before being shipped out of the country. Besides, there are visible punctures on the cake in the footage. The video is an example of manipulation.