Has Tunç Soyer worked on a flag and money for the autonomy of İzmir?

Ezgi Toprak06/07/202010:49
Yorum yok
CLAIM: Tunç Soyer has worked on a flag and money special to İzmir. He demands autonomy for İzmir.

On social media and news websites such as Sabah and Takvim, it was claimed that Tunç Soyer, the İzmir Metropolitan Mayor, worked on a flag and money special to İzmir; moreover, that he demanded autonomy for İzmir. The video from the meeting Soyer joined was also broadcast on television channels such as A Haber and Kanal 7. It was discussed by politicians. 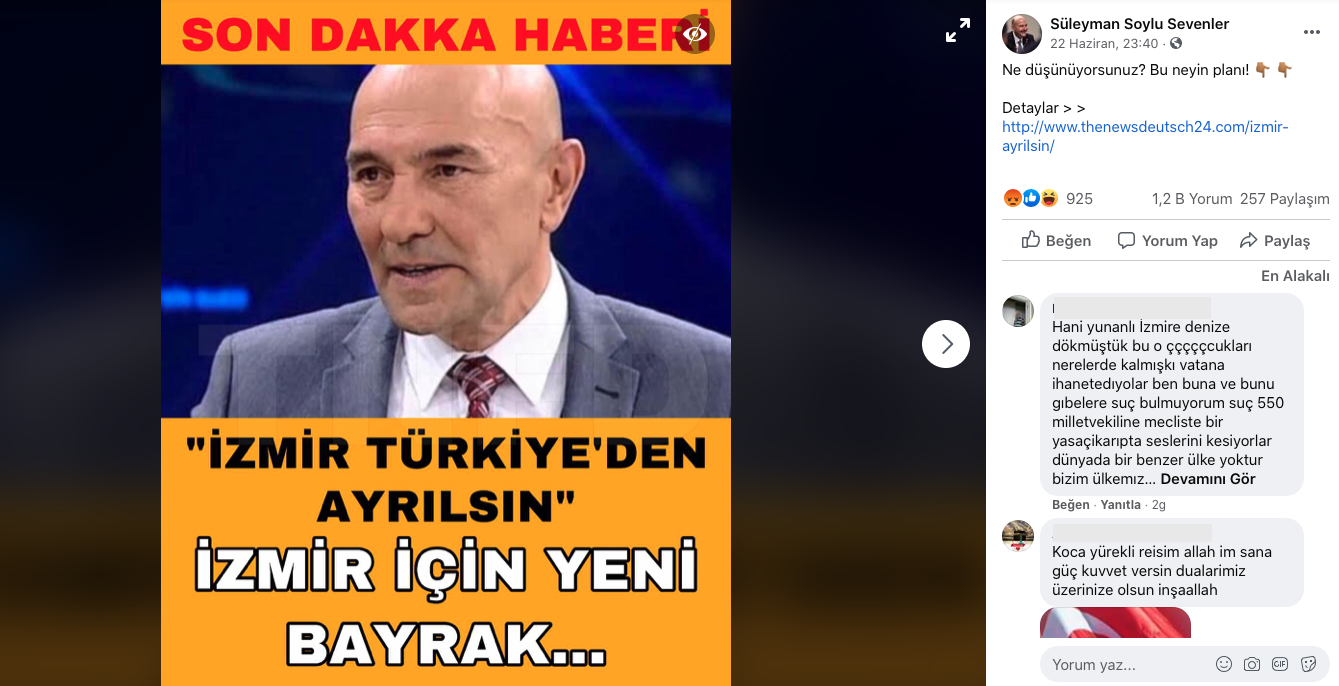 The video in the claim was shared taking the footage from a meeting of Tunç Soyer with Turkey’s Association for Travel Agencies. It is possible to see the posts of Soyer about that day. The video in the claim lasts over a minute while the original video is close to five minutes. The original video can be found on a YouTube account. During the meeting, a representative from the Association asked Soyer some questions. From the 21st second of the video, the Association introduced itself and said that they are a travel agency working e-commerce based in Izmir and they try to get paid with blockchain technology. He stated that bitcoin and its derivative coins started to be heard especially with the change of banking systems due to Covid-19, In the 47th second of the video, he asked whether İzmir Metropolitan Municipality is planning an investment in blockchain technology. He also remembered that Konya Metropolitan Municipality is also working on this technology in the 57th second.

As of 1.06 minutes of the video, Soyer tells the research about the flag of İzmir used before the 1800s. İzmir was one of the rare cities that had a flag at that time. It had a green-white striped flag. He also adds that the academics wrote an article about it and they would publish it. After the flag, he talks about his idea to produce the money of İzmir, which can be called “İzcoin.” He tells that his mates warned him about the possible claims that he would establish a state when the money and flag are considered together. Then, he highlights that they would produce money with blockchain technology and it had already been started for the voluntary works on the page of “Bizİzmir.”

He says that this system functions based on the exchange system between the voluntary works and the municipality’s service. He gives an example: “Let’s assume that you harvest cherries in the cherry garden in Kemalpaşa and supported the producer. We will load 10 points on your card for your 10-hour work. When you get those 10 points, you will be able to get eight ferry tickets and three concert tickets.” He emphasizes that they plan to develop the barter economy and this way of working with volunteers will be expanded.

Tunç Soyer starts his speech by referring to an academic’s work on city flags in history, saying “There was also an Izmir flag in the 1800s”. The owner of the study is Mehmet Öznur Alkan, President of Tarih Vakfı (The History Foundation). Alkan’s work titled “Exceptional City with a Flag in History: İzmir” in the 315th issue of Toplumsal Tarih Magazine can be seen both on the website of the Foundation and his social media account. 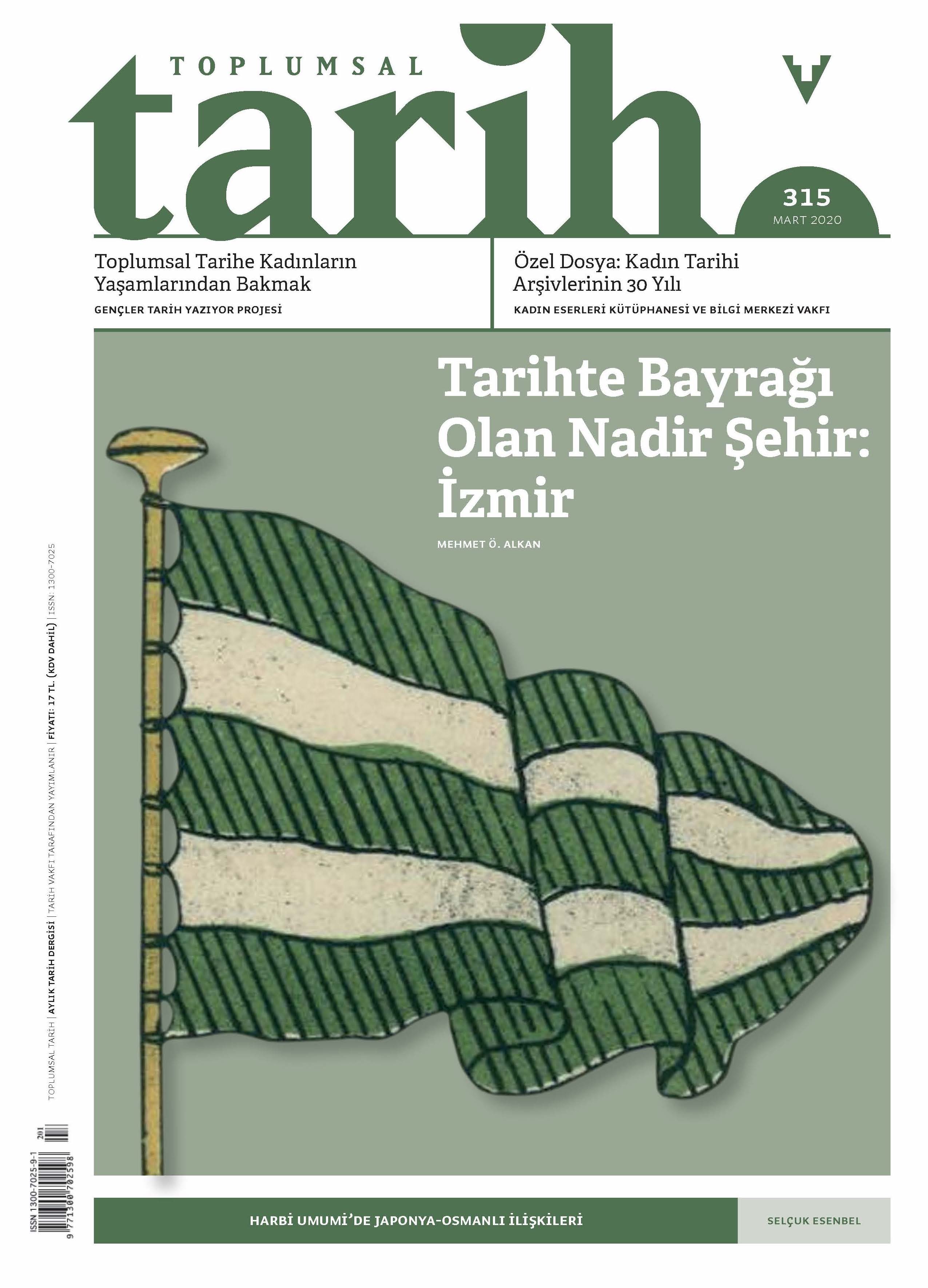 Mehmet Ö. Alkan’s article tells about the flag İzmir used in the period from the earlier 17th century to the 20th century and the adventure of this flag by visual sources. According to the article, the reason why Izmir has a unique flag is since it is a port city. Many port cities have flags. 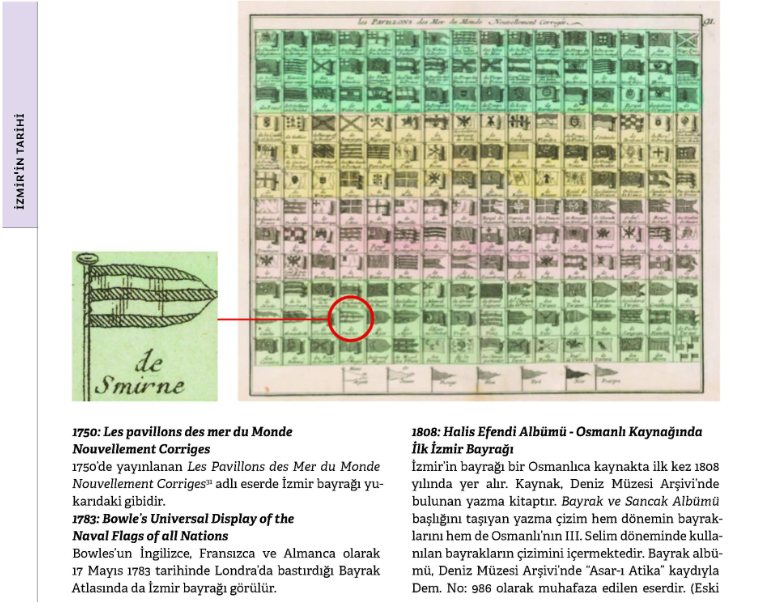 The claim that İzmir will have a unique currency is not true. Because the so-called Izmir’s currency is not issued money. He mentions about a fully digital, encrypted, virtual currency that can be used in exchange transactions called cryptocurrencies. Soyer also says in his speech that this money can be called “IzCoin” and that the barter economy will grow with this money.

After the posts with fragmented views about his words in the meeting, Tunç Soyer made a statement on his social media accounts and said that the issue about the Izmir flag is an academic study and the İzmir money is a currency used for digital shopping tools. Soyer participated in the program on Fox TV on 23 June 2020 and explained that he told about the article of the head of Tarih Vakfı about the İzmir flag just for a joke in the meeting with Turkey’s Association for Travel Agencies.

In conclusion, the claim that Tunç Soyer worked on a flag, and money for the autonomy of İzmir is not true. When we watch the whole video, it is seen that the flag of İzmir is an example in an academic study and that the money of İzmir is bitcoin. The post in question is an example of isolation among the videos of missing context.

YouTube, The whole video of the speech given by Mayor Soyer in Turkey’s Association for Travel Agencies, 22 June 2020

YouTube, The whole video of the speech given by Mayor Soyer in Turkey’s Association for Travel Agencies, 22 June 2020