Is the cost of Çamlıca Mosque close to that of SpaceX rocket?

In a claim on the social media and an sent to Teyit, the budget of Çamlıca Mosque was compared to the cost of the launch of the Falcon 9 rocket used in the launching carried out by SpaceX on May 30. It is stated that the total amount spent for Çamlıca Mosque is 110 million dollars, while the launch cost of Falcon 9 is said to be 130 million dollars. The post received more than 22,000 likes on Twitter and nearly 5,000 retweets. 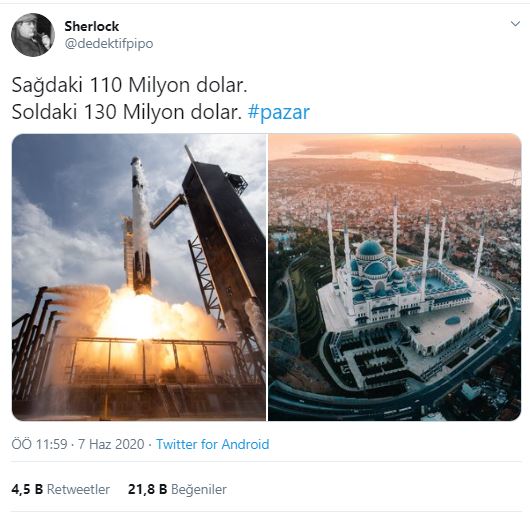 One of the biggest discussions about Çamlıca Mosque, which has been talked in the context of its location, the project process, its dimensions, the bankruptcy of some companies that undertook the project, and the postponed opening date, was the resource allocated to the project. The mosque in Üsküdar Çamlıca, the construction of which started in 2013, is the largest mosque in the history of the Republic, with a capacity of 63 thousand people, six minarets and an area of ​​57,500 square meters. The mosque includes a conference hall, a library, an art gallery, a car park and a Museum of Traditional Turkish Islamic Art. Its tender was held by the Istanbul Association for Building and Sustaining Mosque and Education-Culture Service Units. The price of the tender held in 2013 was announced as 111,500,000 Turkish liras. While it was stated that this figure increased to 150 million liras in 2016, Ergin Külünk, the President of the Association, stated that the total cost of the mosque was 100 million dollars in June 2018, when the construction of the mosque and the urban transformation project continued. There is no explanation about the current cost of the project on the association’s site. 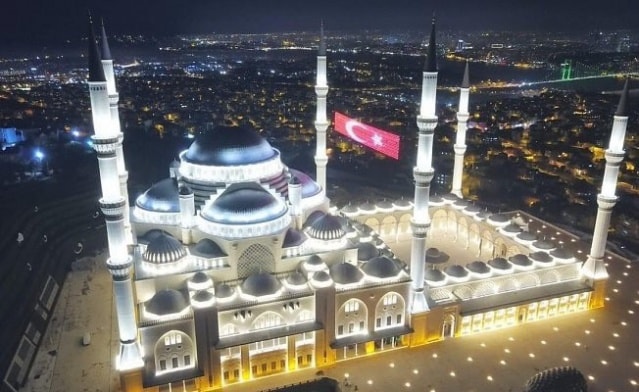 The Falcon 9 rocket of SpaceX, which is the first rocket that can be reused, was sent on May 30 by a space-specific company. Allegedly, the cost of this last launch is $130 million. However, on the site of SpaceX, it is stated that the launch cost of the Falcon 9 rocket is $62 million. According to the latest statements by Elon Musk, the owner of the company, and company employee Jonathan Hofeller, this cost will decrease to $50 million in the coming years. But this figure only shows the cost of launching the rocket. The American Space and Aviation Agency (NASA) pays $55 million to the company for each astronaut that SpaceX sends to space, and has allocated a $3.1-billion budget to the company under the Commercial Crew Program.

It is not explicitly stated in the claim whether a single launch or the full cost of the project is meant. In order not to ignore the second possibility, we can also look at the entire cost of the system. SpaceX is not a public company; it does not disclose the total money spent on developing the Falcon 9 rocket and the Dragon 2 capsule. However, it is known that NASA has transferred funds to the company since 2012 within the scope of the Commercial Crew program. Falcon 9 is thought to have spent more than $440 million for R&D studies, from the establishment of the company to the successful launching. According to the report released by NASA, if a similar vehicle was produced by NASA, its cost would be three times that of SpaceX.

That is, neither the launch cost nor the known figures about the cost of the system are in line with the claim. 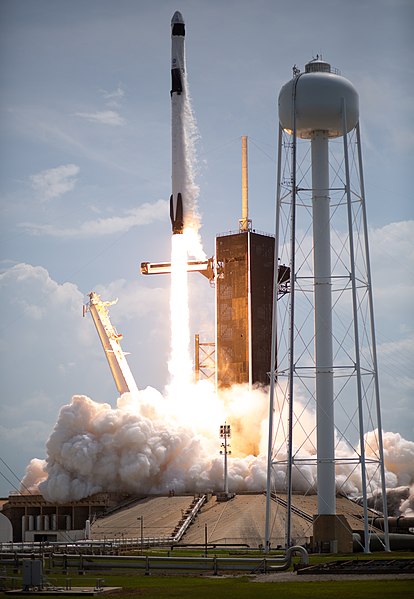 The Falcon 9 rockets and capsules produced by SpaceX can be reused. This launch also has a special place for the USA. It is the first time since NASA sent astronauts into space with the spacecraft called Atlantis, using its own spacecraft. Since 2011, NASA has been sending its astronauts to the International Space Station using Russian Soyuz spacecraft and paying $90 million for each astronaut. The amount paid to SpaceX is $55 million.

Bianet, TMMOB: Mosque Competition for Çamlıca is not Acceptable, 25 July 2012

Radikal, The firm that will build the Çamlıca Mosque has been announced, 5 July 2013

SpaceNews, SpaceX targeting 24-hour turnaround in 2019, full reusability still in the works, 11 May 2018

Redbull, How Did SpaceX Become the World's Number One Satellite Carrier?, 25 December 2017

Bianet, TMMOB: Mosque Competition for Çamlıca is not Acceptable, 25 July 2012

Radikal, The firm that will build the Çamlıca Mosque has been announced, 5 July 2013

SpaceNews, SpaceX targeting 24-hour turnaround in 2019, full reusability still in the works, 11 May 2018

Redbull, How Did SpaceX Become the World's Number One Satellite Carrier?, 25 December 2017